Jean’s grand-daughter Hannah Hobbs says “I have got the story of Rosemary Doll (Dolly Hobbs). My Grandma Jean Moss, is 87 years old and thinks she was about 8 when she was given a dolly in December, either for her birthday or for Christmas. She called her Rosemary.

In Plymouth during the war, there were lots of air raids in the night.  Jean’s father was in the army in Worchester. He decided that his wife Edna and daughters Sandra and Jean needed a break from the many sleepless nights spent in the bomb shelter, so he booked them one night in a room on a farm, close to his base in Worchester.

The next morning, they heard that their home had been hit by an incendiary bomb, which had set everything alight. Jean’s mother headed straight back to Plymouth. When she arrived, the house was still smouldering, but she still crawled in to see what possessions she could save. There was very little. She found my Grandma Jean’s dolly, which was badly cracked all over, and Sandra’s blackboard which was burnt on one side; for herself she found only a night dress.

When she returned from Plymouth, you can imagine how upset the children were that all their possessions had been destroyed; but my grandma was so pleased to have her dolly back. She vowed to keep her forever, despite her damages.

Until recently, she has been in a box in my grandma’s bedroom, kept safe. When she had her room redecorated, she decided that she wanted to put Rosemary on display, so her younger sister, Linda, made her a new outfit and bonnet, and she has been sat on a chair by her tv.

My grandma has always said that she would like her to be mended so that she isn’t so floppy. So one day I decided that I would look into getting her fixed. I found Leith Toy Hospital and sent her off!

My grandma is very excited to get her back as she has missed her. 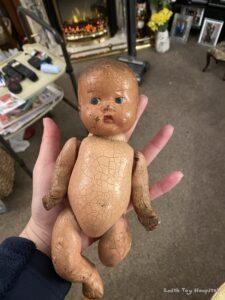 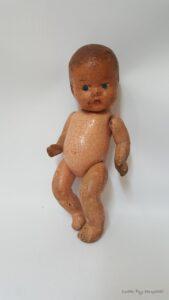