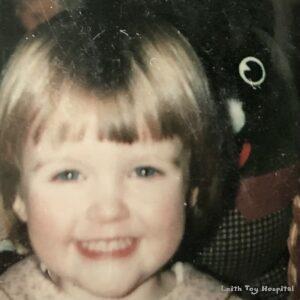 Gillian says “I was given Humpty on Christmas day 1982, when I was three and a half. Santa brought Humpty, along with a Paddington Bear and his  Aunt Lucy- my sister & I must have been very good that year! My mum still talks about that Christmas day – I had to be woken up because I was ill. Even now, I still get up at silly o’clock on Christmas Day so something was definitely wrong! I love looking at the old pictures- seeing all our gifts and thinking about our grandparents. I remember being told not to be rough with him. I’m assuming he was very expensive:  he’s a pretty snazzy guy. We were so lucky growing up; it felt like we had everything. It’s only now, as an adult, that I know of the money worries my parents had when they were younger.

I had a favourite teddy who went everywhere with me (he sometimes had his own adventures too, when he got lost). But Humpty was too posh for that; he stayed indoors. He’s always been well looked after, and hasn’t needed any repairs till now: but the moths have had their wicked way with his felt bits. Most of my childhood toys are still in our parents’ loft, but Humpty still lives on a shelf in my living room. Now that everyone knows Humpty is getting a makeover, we’re going to have a day, post covid, of sorting through our old toys. I can’t wait to rediscover the memories!”