Lisa says “I was given Zinni Bear just after my fourth birthday, in the year 2000. I had a favourite toy called Bunny, who wore a tartan dress. I had Bunny since birth, but I lost him on the teacup ride at Disneyland Paris. On the ferry on the way home, I saw Zinni Bear, and I was given him as a replacement. Zinni Bear filled my heart with so much joy when I saw him on the boat: he was small, with a welcoming expression and very soft fur.

He’s had many adventures. He’s had so many tears and holes: he even had his head torn off after I took him to school and my classmates made fun of him. He’s been left at a hotel in Scarborough and the owners sent him back to our address and wrote “enclosed, one very loved bear.” He has travelled everywhere with me: to Paris, Spain, Florida, Switzerland, The Canary Islands, Germany (several times), Cyprus, Italy, Malta, Tunisia, Greece and many more places. My grandma used to make him clothes and he always wore Angalena Ballerina Clothes!

He will always be my best boy, I can’t sleep without him even at 25 years old!” 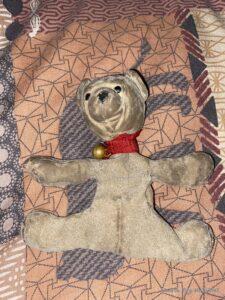