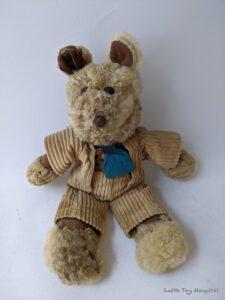 Julia told us Ted’s story. “Ted was made in England during World War 2. He was handmade, probably by someone in the village in Devon where my mum was living. He was given to my brother when he was a toddler, and when he later rejected him, I inherited him in 1946, when I was one. In 1951,when I was 5,  I took him to Canada, tucked up in my suitcase. We were visiting my grandparents; we later settled in Ottowa. Ted came with me to university in Vancouver, then lived in London with me at LSE. We next lived in Singapore for a year, before moving to Canada again, then London and Devon. Finally we settled in Edinburgh. I have many memories of packing him for travel then finding Ted a place to sit in our new home: he always helped me to settle in and feel at home.

I made Ted a new suit of clothes thirty or forty years ago, and replaced a lost ear. Unfortunately, Ted was attacked by moths, so he needed to visit Leith Toy Hospital for some expert care.”