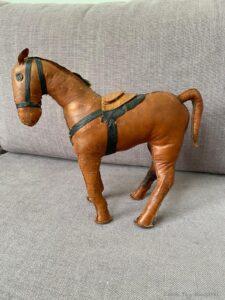 Ali said “My grandfather served in the Royal Army Medical Corps in Egypt in the 1940s, and in 1944/45 he brought home a little leather horse as a present for his five-year-old son (who grew up to be my dad). Dad remembers looking after Champion very carefully; he liked the fact that he had long delicate legs, but could still stand up. Dad named him after ‘Champion, the Wonder Horse’, who was the on-screen companion of Gene Autry and starred in a number of films. These films were shown on television when we were young – it had a catchy theme tune, which we would sing to Champion. The little horse was always around in my childhood – he was more of an ornament than a toy, but my siblings and I played with him often. We were always careful with him. In the future, I am planning to give him to one of my adult daughters. I sent him to the toy hospital because his leather skin had got extremely fragile and split in several places, letting some of the stuffing fall out – I believe he was treated with moisturiser!”