The story of Suzy, a doll belonging to Clare Wilkinson

Clare says “When I was 2 years old my parents split up and my Mum decided to move back to Ireland to be with her mother, my Nan. My Mum got a job at an insurance company and became very friendly with a lady called Betty, who was in her fifties at the time. She had no family and used to come to ours for tea. She became like a second grandmother to me and was always bringing me presents.

One day when she came for tea shesaid she had a special present for me: Suzy.  She told me that Suzy was already an old doll, who had been given to Betty when she was a little girl. I was a thrilled, mainly because she was black: I had never had a black doll before and I don’t think they were very common at the time. She became my forever friend.

I am 61 years old now so Suzy must be well over a hundred. She has had many outfits over the years. She has been everywhere with me … she came to university, and she has shared every house I have ever lived in. However, in my last house she was left in the loft for protection, because her arms, legs and head were all broken.

Five years ago, I moved to an old farmhouse just outside of Newcastle and she became part of my life again, living in my bedroom. However, she looked awful, as she is  so badly damaged, and my grand children didn’t like her. They thought she was scary, because her eyes rolled into the back of her head and her head rolled round.

With Covid we decided to do out the stables that were attached to the house. We have made into another room where I do my Yoga and my husband does a gym session. It’s very cozy and Suzy lives in the rafters where she looks down on us. I had to put her somewhere safe!

I decided then that she needed to be fixed!!

So here she is at Leith Toy Hospital waiting to be mended. She is now in the capable hands of Kate who tells me she had a voice box that I didn’t know about, which also controls her legs and arms. It has obviously not worked for years, so that needs to be fixed! There can be no price on Suzy: she is my pride and joy, and over the years she has given me great pleasure.

I have a new dress waiting at home for her and a new band for her head.

I would like to think that when I pass my grand children will take her and look after her.

Thank you Kate at Leith Toy Hospital for taking on this project.” 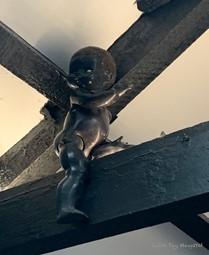