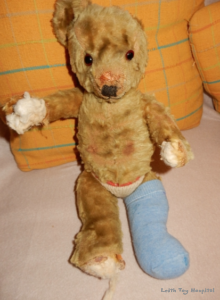 My big brother John was given Ted for his first Christmas, in 1956. John is seven years older than me.  He always allowed me to play with his Ted. One day I decided that he needed underwear, hence the knitted knickers!

Ted has spent most of my life in my parents’ bedroom, sitting on top of the bookcase where my mother kept her special books.  (Mum used to be a teacher and was a professional book buyer!)  For the last 4 years Ted has spent his days with Mum in a care home, still keeping guard over her most precious books and helping her get through the lockdown. Giving dementias patients a cuddly toy, or doll can often calm them and give them a focus. Although Mum is unable to read much these days, she often cuddled Ted and told him stories and she got upset if she was separated from him. When Ted needed attention at the toy hospital, I temporarily swapped Ted for another bear,  so that the real Ted could have his ears, nose and paws repaired.

Ted now enjoys a life of luxury, sitting with a couple of his old friends on an Ercol chair that belonged to my Aunt,.